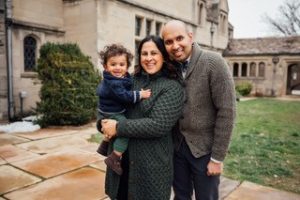 Lakshmi is a staff attorney at UPMC Health Plan. She is a graduate of Capital University Law School in Columbus and came to Pittsburgh “for love,” to join her husband who is an oncologist at UPMC. Lakshmi has been an active participant in the Coalition’s Ally-Ready Training Program.

Tell us about your heritage.
I am a first-generation Indian American, born in Dayton, Ohio. My father immigrated to the United States in 1972, and my mother followed in 1978 after they were married. My parents are from the southern state of Karnataka, and we are Kannada Brahmins. While my parents are from the same part of India, they are from different communities: my father’s family is Sankethi, a community that has its own dialect (a language that is a mix between Tamil and Kannada); my mother’s family is Madhva. I consider myself to be part of both communities, and am fortunate to have experienced the traditions of both, particularly the food!

How do you like to celebrate your South Indian heritage?
One of the ways I am able to celebrate my heritage every day is by food – I married a fellow South Indian – my husband is from Singapore, but his family is originally from Tamil Nadu. Our cuisine is quite similar, and we enjoy our South Indian food at home almost every day. One staple dish in Karnataka and Tamil Nadu is saaru (in Kannada) or rasam (in Tamil); a tangy soup that is made with tamarind, lentils, tomatoes, and finished with a powder (called podi) that is unique to every family. I consider myself fortunate to be able to use my grandmother’s saaru podi, which is a recipe that has been passed down for many generations – she roasts and grinds the spices and lentils by hand.

One of the advantages of living in Pittsburgh is that we have a deep-rooted South Indian community. You may have seen the white building in Monroeville, but the Sri Venkateswara Temple was one of the first temples in the United States, and is an homage to one of the most sacred temples in South India, the Tirupati Temple. Pre-COVID, we would visit the temple almost every weekend. My family has been visiting this temple since its inception, so it is truly meaningful for me to be able to take my son to the temple – I am able to share with him the same experiences that I had growing up. A secret gem inside the temple is the canteen, which has some outstanding South Indian food!

We also listen to a lot of South Indian Classical music, and pre-COVID, we would attend music concerts at the SV Temple, or drive to Columbus for concerts.

What do you wish more people knew about your South Indian heritage?
Indian culture is more than chicken tikka masala. I encourage people to learn more about South India – comprised of five states, South Indian’s heritage is rich, from food to music, poetry and dance, and our expert weavers who make brilliantly beautiful saris and other fabrics.

Is there a particular Indian historical figure who has inspired you as you have grown into the person you are today?
Growing up in rural Ohio, it was often difficult to find an Indian person to look up to, besides my parents and family. However, as I developed into my professional career, I gained inspiration from several prominent Indians:

What movie, TV show or book would you recommend to someone who wants to be a better ally to Asian Pacific American people and why?

With rising anti-Asian harassment and hate crimes, what would you like non-Asian Pacific Americans to know or do?
I think it is important for those who are non-AAPI to speak up and be supportive of us during this time. Battling microaggressions is a way to show solidarity – for example, urging white colleagues to pronounce AAPI names correctly when faced with responses of: “the name is too difficult; the name is hard to pronounce,” etc.

What advice would you give to a young Asian Pacific American lawyer just starting out in their career?
Reach out to as many AAPI attorneys as you can find in your community, so you know that you are not alone in this endeavor. Also, I would urge young lawyers to not abandon their cultural preferences in hopes it will make them a more attractive candidate.

What advice would you give legal employers about what they can do to make workplaces welcoming and supportive for Asian American Pacific lawyers?
I encourage legal employers to recruit and retain AAPI lawyers. While many cities do have networks such as SABA, APABA, etc, we do not in Pittsburgh, and I believe it’s important for employers to give AAPI lawyers access to national conferences and associations to develop their networks and gain mentoring opportunities.