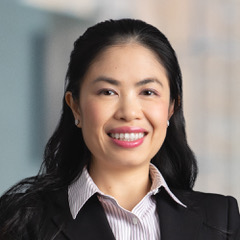 Admitted to practice in both the U.S. and the People’s Republic of China, Yuanyou (Sunny) is a corporate attorney who focuses her practice on international business matters and trade. A graduate of Widener University School of Law, Sunny is active in several industry organizations, holding leadership roles in regional and national bar associations.

Tell us about your heritage.
I was born and raised in China. I had finished my law school education and was admitted as an attorney in China when about 15 years ago, I had the opportunity to come and study in the U.S. I had a strong interest to learn about the U.S. legal system, so I took the opportunity and came here. I eventually settled down in Pittsburgh about 10 years ago.

How do you like to celebrate your Chinese heritage?
For me, Asian Pacific American Heritage Month affords a special opportunity to reflect on my own identity as a Chinese American immigrant while also honoring the contributions of Asian Americans to art, culture, music, politics, and business. Typically I would get together with friends and enjoy some Asian food, music, dances, movies and/or TV shows. I also celebrate Chinese traditional holidays and make some special dishes that are typically enjoyed for traditional holidays. For example, for the Spring Festival, which is the Chinese Lunar New Year, I will have traditional Chinese banquet dinners every year. Fish is a must because in Chinese “fish,” pronounced as “Yu,” signals “Nian Nian You Yu,” which means abundance and prosperity every year. I would also gift “red envelops” to my children and light up some fireworks. I visit museums to see some traditional Chinese exhibits, buy artwork from local Asian-American artists, or read some books about Asian American history. This year I also made a special effort to connect with the Asian American community in Pittsburgh as well as to connect with other communities to help raise awareness in connection with the Anti-Asian hate crime that has increased dramatically during COVID-19.

What do you wish more people knew about your Chinese heritage?
Well, hard to say, I guess many things, but most importantly, I wish people would learn about the Chinese heritage beyond the stereotypes. As you may know, the stereotypes we have in the West about Chinese people or Chinese heritage are often based on harmful beliefs that cast them in a bad light. This is especially true in recent years with the geopolitical tensions between the U.S. and China. You generally only hear negative comments about China or Chinese people, such as they “steal technologies” or “engage in unfair trade practices.” But Chinese heritage is so much more than just the technology competitions or unfair trade practices or the geopolitical tensions. There is so much more to that, whether we are talking about the variety of food or the long history or the family value or the geography. So I really wish people will be able to look beyond the stereotypes, learn about our heritage, and get to know people as people.

Who is your Asian Pacific hero or role model and why?
I’m not sure I had any one in particular, but I did watch a lot of Hong Kong legal TV shows and also looked up to Hong Kong movie stars, especially Jet Li and Jackie Chan. I also admired Asian American business leaders in the United States who aren’t afraid to challenge their limits and status quo.

With rising anti-Asian harassment and hate crimes, what would you like non-Asian Pacific Americans to know or do?
As the entire country grapples with the COVID-19 pandemic, the Asian American community is also facing an alarming rise in anti-Asian violence, racism, and discrimination. In 2020, nearly one in three Asian Americans reported experiencing racial slurs or jokes since the start of the COVID-19 pandemic. Stop AAPI Hate documented over 3,800 incidents against the Asian American community since March 2020, ranging from violent attacks to verbal harassment, and many more are unreported. The data is alarming and the reasons are complicated. I think it would be helpful for non-Asian Pacific Americans to know that this is happening and try to address it.

In terms of what to do, the simplest thing managers and organizational leaders can do for their Asian Pacific American employees is to use their privilege to acknowledge the recent news of anti-Asian violence, and give space for impacted individuals to process, grieve, and heal. Leaders should make an effort to address anti-Asian discrimination at workplaces, in terms of hiring, pay inequities, and promotions practices, as well as to map out a plan to provide a safe and non-discriminatory working environment for employees. For example, many employers are providing anti-bias training nowadays, but employers should include specific examples of the stereotypes faced by various communities so that workers can identify their own hidden or implicit biases. Also, employers should have a no tolerance policy and attune to every incident for any discrimination, including any microaggressions. Of course, if you see any actual harassment or crimes happening, step in and help. Hollaback is providing excellent free training on what you can do and how you can intervene in such a situation, and I encourage people to attend such training to learn more of the intervention skills.

What advice would you give to a young Asian Pacific American lawyer just starting out in their career?
Do not be afraid to speak out and be yourself. Asian Pacific Americans are traditionally taught to just work hard, not to cause any attention, and not to speak out. They are generally of firm belief that things will come naturally if they just work hard, but we know that is not necessarily true. In fact, I think many Asian Pacific American lawyers have missed advancement opportunities or leadership positions because they do not speak up. So advice No. 1 is work hard but also do not be afraid to express your opinions. Advice No. 2 is be yourself. I think many young Asian Pacific American lawyers just starting out in their career try to become someone or act in any particular manner, because they think it would make them look more powerful or more persuasive. It took me many years to learn that it is okay to be yourself; you can build up your own style of effectively representing clients – you just need a little confidence and work towards it, so I want to give this advice to younger lawyers starting out, too.