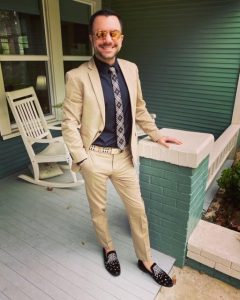 What does Pride mean to you?

June marks LGBT Pride Month, a nationwide celebration that marks the anniversary of the 1969 Stonewall Riots in New York City – where patrons and supporters resisted police harassment that had become all too common for members of the lesbian, gay, bisexual, and transgender (LGBT) community. Out of this resistance, the LGBT rights movement in America was born. During LGBT Pride Month, we commemorate the events of June 1969 and commit to achieving equal justice under law for LGBT Americans.

What do you find inspirational about Pride?

The LGBT movement never stops advocating for equality – despite victories and setbacks. We keep moving forward, and Gloria Gaynor helps remind us that we will survive.

What is your favorite LGBTQ character from a movie, TV show, or book and why?

Will Truman from Will & Grace is my spirit animal. When I saw the show premiere in 1998 when I was a kid, I saw myself in a character for the first time ever. That moment forever changed my life and helped me come out as a gay man. Will Truman is a positive role model for the LGBT community and is a character whose portrayal is refreshingly accurate and not based on offensive stereotypes.

What movie, TV show, or book would you recommend to someone who wants to be a better LGBTQ ally?

Joe Biden said it best, Will & Grace probably did more to change hearts and minds and advance marriage equality (and the LGBT movement) than anything else.

Who is your LGBTQ hero or role model and why?

What advice would you give a young LGBTQ lawyer beginning their practice today?

Be yourself. Don’t try to pretend to be somebody you are not. If you cannot be yourself at your place of employment, it is not the right place for you.

What advice would you give legal employers about what they can do to make workplaces LGBTQ welcoming and supportive?