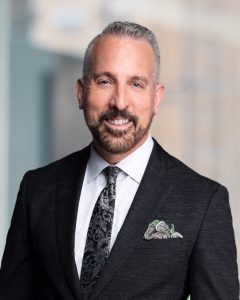 What does Pride mean to you?

To me, Pride represents the dignity, equality, and visibility of LGBTQ people.  Being proud to be who you are, without shame and social stigma, is what most of us in the LGBTQ community aspire to achieve and enjoy celebrating during Pride. As we say at Porter Wright, everyone should be “Proud. Every Day.”

What do you find inspirational about Pride?

The sense of belonging and knowing that you are not alone.

What is your favorite LGBTQ character from a movie, TV show, or book and why?

It’s hard to say who my favorite LGBTQ character is. Growing up in the 70s (yes, I’m that young!), most TV shows and movies that included gay characters were frequently the subject of controversy and censorship. Whether it was ABC’s sitcom Soap, which included Billy’s Crystal’s character, Jodi Dallas, who struggled with his relationship with a closeted gay football player, or one of my all-time favorite cult classic movies, The Rocky Horror Picture Show, featuring Tim Curry as Dr. Frank-N-Furter, a self-proclaimed “sweet transvestite from Transsexual, Transylvania,” I grew up knowing that being gay was what society viewed as “not normal.” Then, in the 80s and 90s, when sponsors pulled out of ABC’s TV series, Thirtysomething, because it aired an episode with two men in bed together after having sex, and ABC cancelled Ellen shortly after Ellen Morgan’s coming out as a lesbian, it was evident that being in the closet was better than being “out and proud.” It wasn’t until TV shows like Will & Grace, Queer as Folk, and more recently, Modern Family, did society change its views on LGBTQ people, making it easier for people like me to come out of the closet.

What movie, TV show, or book would you recommend to someone who wants to be a better LGBTQ ally?

I would recommend two movies: Philadelphia, starring Tom Hanks and Denzel Washington; and Trevor, the short film which highlights the struggles that LGBTQ youth face.

Who is your LGBTQ hero or role model and why?

Ellen DeGeneres. Why? Because, she’s Ellen!

What advice would you give a young LGBTQ lawyer beginning their practice today?

Find a place where you can excel at being a lawyer while being your true self.

What advice would you give legal employers about what they can do to make workplaces LGBTQ welcoming and supportive?

Embrace diversity and inclusion by actively recruiting diverse lawyers and making everyone feel accepted, welcomed, and respected. Stop using the adage: “But, this is the way we have been doing that for years.” Diverse lawyers bring a whole set of experiences to the table that were not around 30 years ago. Diversity and inclusion allows a law firm to more accurately reflect the culture, value, and diversity of its clients, while maintaining its professionalism.